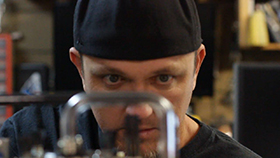 PcjunkieMods has been around since 2006 becoming an official business in 2012. About 10yrs ago Lee was given a PC on his birthday by his sister that was virus infected.  After weeks of destroying viruses Lee attempted to play Star Wars and found that the machine ran very poorly.  Naturally Lee wanted to figure out how to upgrade his new machine.  The seed had been planted and with Lee’s smart know-how on fixing anything a hobby began to grow into what the world knows now as PcjunkieMods.com. 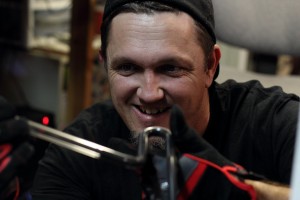 Recognized early with his YouTube builds and PC mod competitions it was only natural for this tech guru gamer to go into business.  As a hobby of helping out friends and family while exploring one’s imagination and ingenuity, PcjunkieMods specializes in building simple desktops to watercooled monster gaming PCs.  All while staying loyal to its roots by continuing to repair machines.  One of Lee’s finest mods would be his personal Red Harbinger desk. Even more so now with all the new bells and whistles that were not there in the original build. The Red Harbinger desk can be seen on PcjunkieMods YouTube channel. 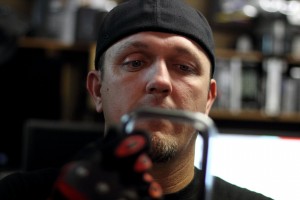 PcjunkieMods is highly sought out for being an expert in overclocking, PC modifications, and extreme gaming PCs; including overclocked and water-cooled servers.  With most recent accolades such as being featured in Intel’s #Expertmode videos and CPU’s Magazine multiple times including 2016 March edition.  Lee has been acquired for his expertise by giants such as Nvidia, Intel, Cooler Master, Gigabyte and Asus; all have given him artistic freedom to work with their products.

The mastermind behind PcjunkieMods, Lee Harrington has been recognized as an authority in the PC world for such skills listed above.  He has traveled around the world to places like France, Taiwan and Canada.  With Lee finding himself more in the spotlight doing interviews, special publicized builds and expert tutorials he has always kept his humble beginnings alive.  PcjunkieMods has expanded its shop in the Stockton, CA. area to answer the worldwide demand.  Lee’s goal is to provide an online prebuilt PC storefront alongside a full custom shop in the next 5 yrs.  Lee is up to the challenge even while participating in such respected events like the Inwin Mod comp in Taiwan last June for Computex and the Deadmau5 Project.